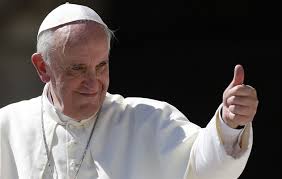 At the end of 2015, the nations of the world will meet in Paris and attempt to hammer out a global deal to cut greenhouse gas emissions. And Pope Francis hopes that the world’s Catholics, as well as other major religions, will be a big part of serious climate action.

This includes a series of steps next year. Francis is expected to tell the planet’s 1.2 billion Catholics why acting on climate change is essential to the faith using an influential church document called an encyclical. This has been long–rumored, but will reportedly be released to the world’s 5,000 bishops and 400,000 priests following a papal visit to the hurricane-damaged city of Tacloban in the Philippines.

All article is here: